A Snapshot of Clean Air Advocacy in America

During the industrial revolution, air pollution from booming industrial manufacturers and a growing network of train lines first became a significant public health issue.  People in urban areas became used to the sight of large plumes of smoke bellowing from smokestacks with many seeing them as a sign of prosperity and economic development. It is hard to believe now, but back then clean air and clear skies were seen as symptoms of economic depression and unemployment.

Today, Americans enjoy much cleaner air and generally understand that air pollution is harmful to health. But this reduction in air pollution and increase in public education didn’t happen overnight. It started with a small series of events that led the general public to take action.

In 1948, the small town of Donora, Pennsylvania experienced a catastrophe that would shape history and serve as a wake-up call around the harms of air pollution. Donora relied economically on two major industrial plants, a steel plant and a zinc plant, and air pollution from these plants was just part of daily life.

During a smog event in October, a warm air pocket passed high above the town, trapping cooler polluted air below, creating a vacuum seal for the pollutants. In an interview with the Tribune-Review in 1998, resident Bill Schemp said, “You couldn’t see your hand in front of your face……if you chewed [the air] hard enough, you could swallow it.” Despite warnings of extremely poor visibility, the town’s annual Halloween parade and varsity football game continued. Over the next five days, roughly 7,000 of Donora’s residents, accounting for about half of the population, fell victim to severe respiratory and cardiovascular health issues. As a result, 20 residents lost their lives. 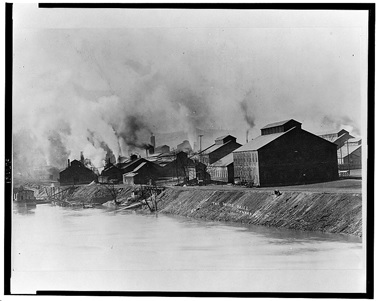 The wire mill, Donora, PA. Photograph. Retrieved from the Library of Congress, www.loc.gov/item/2002713075/

The Beginnings of Clean Air Activism

The severity of the smog event in Donora and the resulting deaths spurred scientific interest and discussion around the linkages between air pollution and health. As more research came out linking pollution to respiratory and cardiovascular diseases, individual states began passing legislation to reduce their air pollution.

This local action spurred the first federal legislation through the Air Pollution Control Act of 1955 which provided funds for research. Soon after, Congress passed the Clean Air Act of 1963, which was the start of federal programs to control air pollution, not just recognize its existence. The 1963 act also established a federal program within the U.S. Public Health Service and advanced monitoring techniques, as well as research on preventing and controlling air pollution. Despite these initial steps to reduce air pollution, the 1963 act didn’t go far enough. Certain states still found it very hard to make progress cleaning up the air, partially because of pollution blowing in from neighboring states. So in 1967, Congress passed the Air Quality Act which, for the first time, gave states the authority to conduct extensive monitoring studies and source inspections.

In 1970, in a historic move that constitutes one of the nation’s biggest public health victories, Congress passed the Clean Air Act Amendments of 1970, which is more commonly known as just the “Clean Air Act,” and President Richard Nixon signed it into law. This law allowed for federal and state protections to limit pollution from stationary sources such as mills and factories, and mobile sources such as vehicles.  The brand-new U.S. Environmental Protection Agency (EPA) was tasked with overseeing the implementation of the law.

Under the Clean Air Act, the EPA sets limits on several key pollutants based on what the science says is safe to breathe. The agency revisits these limits every five years to make sure that they reflect the latest science and are strong enough to protect public health.

Americans today are breathing much healthier air as a result of the Clean Air Act. From 1970 to 2017, aggregate national emissions of the six common pollutants dropped an average of 73% while gross domestic product (GDP) grew by 324%. According to an analysis by the Energy Policy Institute at the University of Chicago, reductions in particulate matter pollution, driven mainly by the Clean Air Act, have added 1.5 years to the life expectancy of the average American since 1970. The EPA estimated that the Clean Air Act amendments will prevent more than 230,000 early deaths annually by the end of 2020.

Still, much more work needs to be done to ensure that all Americans are breathing healthy air. According to our “State of the Air” 2020 report, nearly half of Americans continue to live in counties with unhealthy levels of air pollution, marking an increase from previous years. This increase in the number of Americans exposed to unhealthy air is due in large part to changing climate patterns. Climate change is driving warmer temperatures, leading to the formation of more ozone pollution and wildfires, which contribute significantly to particle pollution.

What Can We Do Now?

On its 50th anniversary, the Clean Air Act is as important as ever. The law must be fully implemented and enforced to ensure clean air for all.

Sign our petition to tell EPA to set stronger limits on ozone and particulate matter that reflect what the science says is necessary to protect the public health.