After Two Years, Trump’s USDA Is Making Good on Promises (to Agribusiness)

This week, Secretary of Agriculture Sonny Perdue is set to appear before Congress for the first time in a year. When he testifies on the state of the rural economy at a hearing of the House agriculture committee, he’ll have a lot to answer for. Over the last year—Perdue’s second at the helm of the US Department of Agriculture (USDA)—he has been busy sidelining science and undermining the nation’s health on behalf of the Big Food and Big Ag industries.

Oh, and the state of the rural economy? That’s not looking so great under Perdue’s and the president’s watch either.

In a forecast released last week, USDA sees net cash income for agriculture remaining relatively flat over the next decade as expenses steadily rise and income for crops and livestock fails to keep pace. The Minneapolis Federal Reserve highlighted farmers’ economic stress in an update last week, suggesting more farm operations are at risk of “throwing in the towel.”

Yikes. Indeed, farm bankruptcies are on the rise (subscription). And while farm income has been mostly declining since 2013, the Trump administration’s shenanigans—a tax cut that was vastly oversold, a trade war that grinds on, and a lengthy and pointless government shutdown at the very time farmers needed the USDA’s services—certainly aren’t helping. Repeated insistence of the administration’s devotion to farmers and their livelihoods rings hollow.

60.7K people are talking about this
View image on Twitter 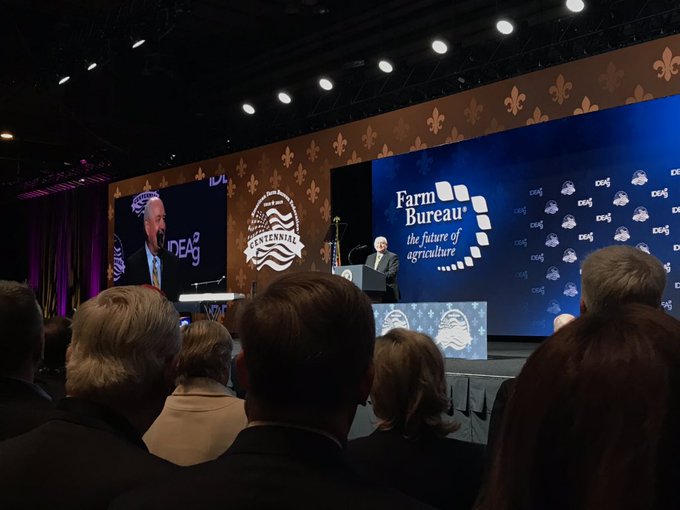 It is great to be at the @FarmBureau’s Centennial Annual Convention and introduce @POTUS who is a true friend to the American farmer. #AFBF19 #AFBF100

So yes, Secretary Perdue should have to answer tough questions about the farm economy. But there are other pressing issues—for farmers and eaters—that the House agriculture committee should ask him about as well. For example:

SCHOOL LUNCHES: Why is Perdue making them less healthy? Who does that serve? Earlier this week, Secretary Perdue gave a speech at the School Nutrition Association’s annual legislative conference. His comments on school lunch “flexibility” were applauded there, but don’t be fooled—it’s not about helping kindly lunch ladies better serve our kids. This industry-backed association (as we documented back in 2015) happily supported Perdue’s recent rollback of science-based rules on salt, whole grains, and sugar-sweetened milk in school meals. The milk rollback, in particular, is a clear gift to Big Dairy (a deep-pocketed industry that undercuts small dairy farmers and very much wants to sell more milk). Meanwhile, two of Perdue’s predecessors recently penned an op-edhighlighting how watered-down nutrition standards contribute to a diet-related health crisis that threatens our national security and our future. (But no big deal, right?)

DIETARY GUIDELINES: Why is Perdue stacking the expert committee and short-changing the science-based process of developing nutrition advice? Last week, the USDA announced the composition of a 20-member expert advisory committee that will consider the state of nutrition science and make recommendations to Perdue and the secretary of health and human services. It’s the science-based heart of the process of updating the federal Dietary Guidelines for Americans, which influences how millions of Americans eat and offers an opportunity to improve public health. But the new panel appears to be more heavily industry-influenced than usual, with membersconnected to the meat, infant formula, and soda industries. Comments this week by Perdue indicate he is taking a “both sides” approach to nutrition science. Moreover, other recent comments suggest that the process—which is already months behind schedule and not previously expected to be completed until well into 2020—might be rushed to generate final 2020 guidelines by the end of this year. Why?

.@SecretarySonny on need for “balance” on Dietary Guidelines Advisory Committee – “You know our history with food. Eggs are good, eggs are not good; they’re good now…Fat: Not good, good. So we’re trying to have a balanced perspective of that.”

“We think the consumer ought to choose, really, how they eat, but you ought to have professionals on either end of the spectrum — both from the plant-based and the meat-based side of the equation — making recommendations” –@SecretarySonny on Dietary Guidelines

FOOD STAMPS: Why is Perdue circumventing Congress to take food off people’s plates? At this week’s hearing, Perdue will be face-to-face with the House agriculture committee, which just in December voted resoundingly against a major shakeup of the SNAP program. But on the very same day as that vote, Perdue announced that his USDA would propose a new rule that would undermine the program in a slightly different way, but with a similar result: some 750,000 unemployed or underemployed adults would lose SNAP benefits when the rule is fully implemented in fiscal year 2020. Why was this rule proposed immediately after Congress approved a bill that intentionally removed similar provisions?

USDA RESEARCH: Why is Perdue sidelining and politicizing science in his own department?We’ve written about Perdue’s ill-conceived proposal, announced last August, to reorganize and relocate two of the USDA’s four research agencies, the Economic Research Service and the National Institute of Food and Agriculture. The move would unduly politicize important USDA research, and is not backed by any publicly-available cost-benefit analysis. It has been opposed by more than 1,100 scientists, former USDA officials, the agencies’ scientific staff, and members of Congress who hold the department’s pursestrings. Meanwhile, in another recent and related end-around, Perdue circumvented Congress by appointing Scott Hutchins—previously nominated to be USDA chief scientist but not yet been confirmed by the Senate as required by law—to the next-highest-ranking position, deputy under secretary of REE, a role that doesn’t require Senate confirmation. Why is any of this necessary, and who does it serve?

I’ll be watching tomorrow to see what Perdue is asked—and what he says—about these and other issues. Hopefully, tomorrow’s hearing is just the beginning of Congress taking up its constitutional duty to provide a check on the USDA and hold Secretary Perdue accountable to the public interest.