Green For All Mobilizes Central Valley Residents to Speak Out for Clean Air, Clean Cars

By Green for All

Dozens of Central Valley residents put off work and other commitments to testify Monday at the U.S. EPA hearing on the “Safer Affordable Fuel-Efficient Vehicles Rule”, a proposal put forth by the Trump Administration to weaken clean car standards (despite the misleading name).

The Latino community in particular, turned out in force to reject the Trump Administration’s clean car rollbacks. Testimony after testimony, residents spoke of the ongoing contamination and pollution they see in their communities: pesticides, water contamination, air pollution, asbestos. Rolling back the Clean Car Standards, they say, would further put their health at risk. 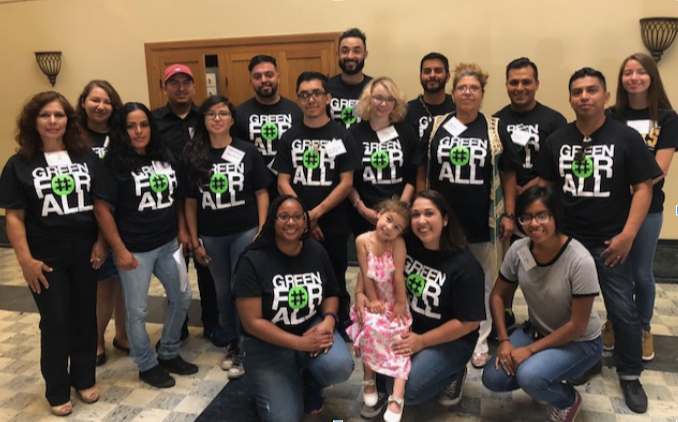 Fernando Serrano of Tulare County said, “We live in a county with some of the worst air quality in the country as it is and if the Trump Administration rolls back this regulation it will get worse for us. We want to live in our communities and breath safe, clean air.“

No translators or interpreters were provided at the hearing despite the fact that Fresno (where the hearing was held) and surrounding counties are among the top counties in the country for residents with limited English proficiency. Several residents provided their testimony in Spanish, although it is unclear whether their comments will be considered.

“The so-called SAFE Rule will do nothing to help the American people, but it will do a lot to hurt low-income communities and communities of color already overburdened with pollution,” said Michelle Romero, national director of Green For All. “This is a serious issue, and one the public should have a chance to weigh in on. The fact that the Trump EPA chose Fresno to hold its first public hearing but failed to provide Spanish-language interpreters is proof they don’t really care what citizens have to say, but we’re going to say it anyway.”

Approximately 30 residents from Fresno County, Tulare County and the surrounding area participated in the hearing today with Green For All, a national climate justice initiative founded by Van Jones.

In total, approximately 120 residents participated in the Fresno hearing with the overwhelming majority testifying against a rollback of the Clean Car Standard.

To add your voice, please submit comments at www.regulations.gov to Docket EPA-HQ-OAR-2018-0283 on or before October 26 , 2018. Information on additional methods for submitting formal comments is available at https://www.epa.gov/dockets/where-send-comments-epa-dockets.