Beyond TSA: How Is the Shutdown Impacting Our National Food Security?

By United Food and Commercial Workers

There have been a number of recent articles highlighting the air-travel safety issues caused by the government shutdown as more and more TSA agents are forced to call out from work. TSA agents are a visible reminder of the work that federal employees do, but some of the most damaging and dangerous impacts from the government shutdown are ones that are also out of sight of the average American. After all, many people pass through the airport, but not that many people regularly visit food processing facilities.

The FDA oversees 80 percent of our food supply and has suspended all routine inspections of domestic food-processing facilities (Washington Post) and canceled more than 50 high-risk inspections. (Washington Post) The FDA halted many inspections on January 9th, though the agency also resumed the most high-risk ones on January 15th, when FDA Commissioner Scott Gottlieb announced that furloughed food inspectors would be recalled to carry on their work without pay.

40% of FDA workers are furloughed

40 percent of the FDA’s employee’s remain furloughed and it is important to recognize that just because inspections may not be considered “high risk” does not mean they are “no risk” and should be left without inspectors. These decisions about what merits inspection or not are also being made without the informed consent of the American people, who trust that the food they are eating has been held to certain agreed upon standards and guidelines.

UPDATE ON FOOD INSPECTIONS AND OTHER INSPECTION ACTIVITY: The response from our outstanding field force and inspectorate has been overwhelming and outstanding. They’re among the finest, most dedicated professionals in our federal workforce and we’re grateful for their service ->

We re-starting high risk food inspections as early as tomorrow. We’ll also do compounding inspections this week. And we started sampling high risk imported produce in the northeast region today. We’ll expand our footprint as the week progresses. Our teams are working.

41 people are talking about this

Risk of recalls has increased

Workers at the U.S. Department of Agriculture, which oversees meat and poultry, have all continued to perform inspections without pay. It is important to recognize that much of the work inspectors do requires a high level of training and experience, and filling vacant positions with qualified employees can be challenging. Though the dedication shown by the inspectors working without pay because of their commitment to the common good is inspiring, the longer this shutdown continues, the more we are asking those workers to sacrifice. If a number of inspectors are forced to take other work in order to support their families, there is a potential for long-term consequences that will be felt beyond when the federal government resumes its responsibilities.

This week, nearly 40 million low-income Americans received their February Supplemental Nutrition Assistance Program (SNAP) benefits (or food stamps). Beyond the hardships endured by families who reply on SNAP, the program makes up a significant percentage of grocery sales and the harmful impact of the shutdown threatens not only families, but businesses up and down the supply chain.

SNAP accounts for about 10 percent of the food that U.S. families buy for their homes.  Disruption to the SNAP program can cause reduced revenue for grocery stores, disruption to food supply chains, reduced hours and even job cuts for workers, and significant consequences for local economies.

Due to the federal government shutdown, the benefit’s release is occurring weeks earlier than scheduled. It is being reported that recipients may have to wait 40 days or longer before additional assistance is available causing state agencies to warn recipients to ration their benefits.

Shutdown induced uncertainty is anticipated to cause worried hardworking families using food stamps, to stock up on food for the weeks ahead and triggering food shortages at local supermarkets.

Out of touch leadership

In addition to damage done by the disruption of the SNAP program, many federal workers are wondering how to feed their families when they are not receiving a paycheck. This is especially troubling as Secretary of Commerce Wilbur Ross recently expressed confusion over why federal employees would be turning to food banks instead of just taking out loans to get through the shutdown. Donald Trump reacted to the comments by suggested grocery stores need to “work along” with federal employees. 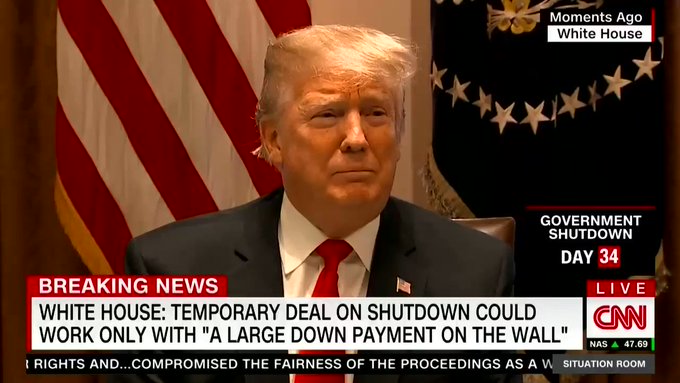 Donald Trump, defending Wilbur Ross, says government workers not receiving a paycheck because of the #TrumpShutdown can simply convince their local grocery stores to “work along” with them.

5,291 people are talking about this

Food access is both a humanitarian issue and bad for business

When you consider that the potential loss of sales in the grocery industry is not only a threat to business, but represents every day Americans who cannot afford to eat right now, the depth of the crisis we are in as a country becomes clear. Grocery workers and grocery stores are united in calling for an end to the shutdown before further disruptions occur in our food stores and on our nation’s kitchen tables.

A partial federal government shutdown started on December 22, 2018 after President Donald Trump demanded a $5.7 billion appropriation for border wall construction be included in the federal budget, something Democrats refused to agree to. The impasse has resulted in the longest government shutdown in U.S. history. Today, many Federal workers will miss their second paycheck in a row.