Endangered Species Day: A Chance to Cherish Nature and Wildlife

“We need another and a wiser and perhaps a more mystical concept of animals … We patronize them for their incompleteness, for their tragic fate for having taken form so far below ourselves. And therein do we err. For the animal shall not be measured by man. In a world older and more complete than ours, they move finished and complete, gifted with the extension of the senses we have lost or never attained, living by voices we shall never hear. They are not brethren, they are not underlings: they are other nations, caught with ourselves in the net of life and time, fellow prisoners of the splendour and travail of the earth.” – Henry Beston

In the midst of the global pandemic, the climate crisis, and the extinction crisis, it’s extremely hard not to feel overwhelmed with all the challenges that humanity, the planet, and its myriad species are facing. How many times in recent weeks have we said, or heard, that these are unprecedented and extremely challenging times? All of these things are compounding each other. We also hear—and innately know—that it’s important for our mental and physical well-being to take breaks, if we can, from the weight of it all and to get out in nature. Hearing the birds, feeling the sun or rain on our face, sitting quietly or moving our bodies outside can be incredibly restorative and lend perspective and strength. Nature heals and balances us, if given a chance.

I am very fortunate to live in Bozeman, Montana, where I have access to vast, wild places. I know many are not so blessed to have the solace of nature so readily at hand. Because this huge region, Greater Yellowstone, is still essentially intact, I have the opportunity to see a lot of wildlife. Among the many species here is one which embodies the essence of wildness to people across the country and was nearly driven to extinction: the grizzly bear. 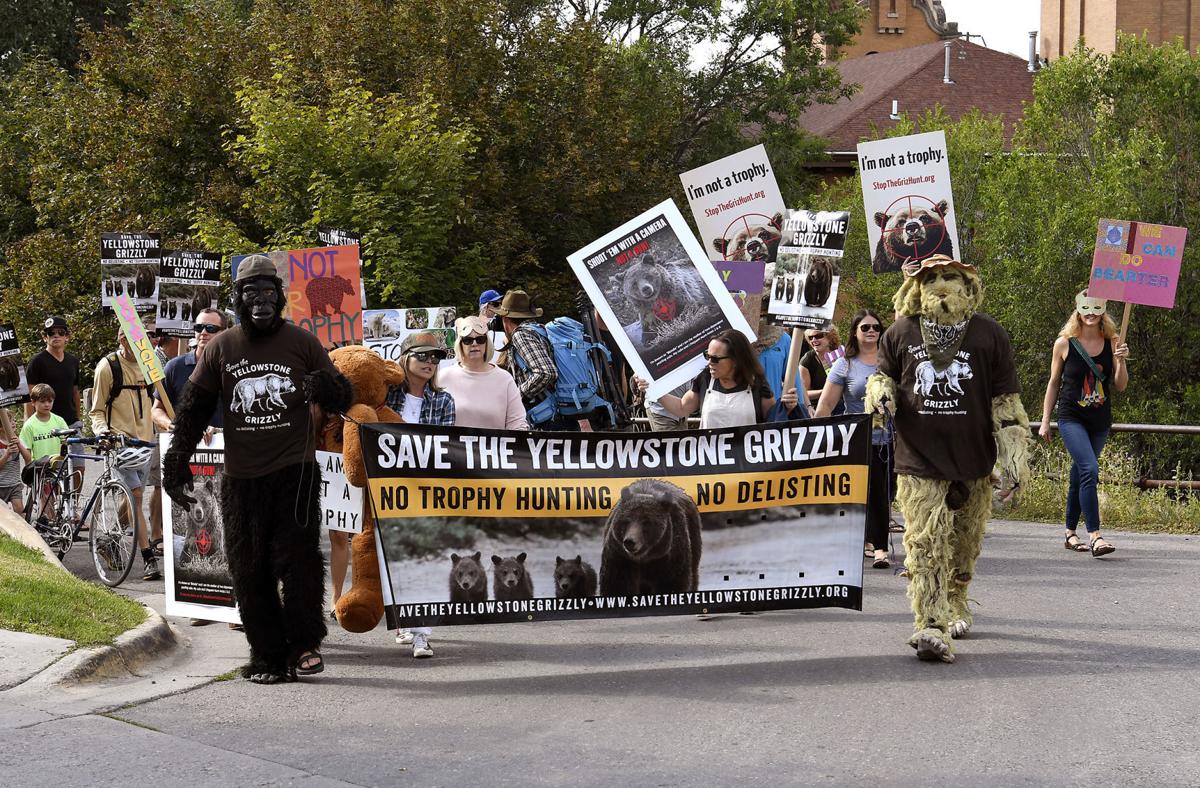 Rally to save grizzly bears from a trophy hunt (2018). Photo: Center for Biological Diversity.

If you can, I invite you to take a few moments today to celebrate Endangered Species Day. Be inspired by what we can accomplish when we recognize how interconnected we are with all life on Earth, and when we act to preserve other species and the lands and waters critical to sustain them.

Under the protection of the Endangered Species Act, many species including the gray wolf, Florida manatee, black-footed ferret, American alligator, California condor, and our national symbol, the bald eagle, have recovered. And though grizzly bears are still threatened and  need the continued protection of the Act, with only a few populations isolated from each other in the lower 48, during my lifetime they have rebounded from just a few hundred to approximately 1,800 today. All of these animals play important roles in maintaining the balance of our natural systems. We can halt the damage and move toward healing when we are united and have the political will to do so.

We need this critical law more than ever. Scientists estimate that 1 million species are now at risk of extinction, and all but one of our country’s endangered species are vulnerable to climate change. Over 2,500 animal and plant species are currently on the Endangered Species list. A recent report from the World Wildlife Fund states that in the past 40 years, wildlife population numbers have declined by 60 percfwent due to loss of habitat, climate change, and other environmental factors. The climate and extinction crises are inextricably linked—as are our best hopes of addressing them.

To halt both the extinction and climate crises, we need to protect the public lands, forests, and waters that provide important habitat for wildlife and that store carbon and take pollution out of the air and water. Instead of fossil fuel extraction, protection of intact lands in their natural state should be the priority. Eminent biologist E.O. Wilson and many other scientists, Indigenous leaders, and the UN International Convention on Biodiversity say that in order to stop the dual extinction and climate crises and to preserve clean water, clean air, and a stable climate, we need to protect 50 percent of the planet by 2050. To meet that goal in the US, we need to protect 30 percent of our remaining undeveloped natural areas by 2030—and to connect those areas to each other so that animals have a fighting chance to access different habitats and adapt to climate change.

It’s an ambitious goal, but one that’s absolutely necessary to help solve the extinction and climate crises. The Sierra Club is part of a large and growing coalition of people and organizations working to make 30×30 a reality, and we need your help. Right now, 30×30 resolutions are in both the US House and Senate and are gaining momentum. We need to demand that our elected leaders step up and support 30×30 as one of the most important ways to halt the extinction and climate crises. In honor of Endangered Species Day, please urge your congressional representatives to support these 30×30 resolutions today.

During the COVID-19 pandemic, the interconnectedness of all life is even more apparent. When the natural balance is upset—by habitat loss and fragmentation, illegal wildlife trade, and other types of wildlife exploitation, pollution, and climate change—the risks to both people and wildlife grow. Scientists, disease ecologists, and other experts warn that continued destruction of biodiversity and habitat will result in more pandemics. Nature is sending us an unequivocal message. It is my heartfelt hope that humanity will hear it and respond with profound changes in our policies, behaviors, attitudes, and relationships to each other, to the planet, and to all species. Nature truly does need (at least) half. And as humans dependent on intact, functioning biological systems for our physical and spiritual sustenance, so do we.

Help us create this vision by celebrating Endangered Species Day today—and by continuing to work with us every day to protect wildlife and the natural world:sc.org/30forclimate.