The Proof Is in the Pudding: Wading Into Fossil Fuel Company Reports

Every February through May, I sequester myself away to read company reports from major fossil fuel companies. It usually gets off to an exciting start in early February when ExxonMobil and Chevron release their shareholder-mandated climate risk reports – this year though, things started early when ExxonMobil released its climate risk report last week (See my colleague Kathy Mulvey’s blog). Then we have the months-long deluge of annual reports, SEC filings, sustainability reports, and finally proxy statements. In all, it’s over 500 pages of corporate accounting, advertising, shareholder reassurance, and spin.

This sounds awful. Why bother?

For example, in its 2019 Outlook for Energy, ExxonMobil made it clear that it expects no decline in energy demand for the next 20 years. And in its climate risk reports, ExxonMobil quietly downgraded its confidence in having “90 percent” of its assets produced in 2018 to “the substantial majority” in 2019. Chevron went from refusing to consider its role as a defendant in over a dozen climate liability lawsuits a material risk for shareholders in 2018 to mentioning it multiple times in its 2019 SEC filings. Our 2019 climate risk report blog and comparison table outlines where companies are falling short in their climate risk reporting. We also have evidence that corporate watchdogging can work. In the process of reviewing documents for our 2018 Climate Accountability Scorecard, we alerted BP to a problematic statement on its website that it later changed.

We also got to ExxonMobil’s and Chevron’s annual general meetings (AGMs) for similar reasons – to make sure companies know we’re watching. AGMs are one of the few opportunities to speak face-to-face with company decision-makers on the science of climate change, which is why we bring a scientist and try to speak with as many board directors, investor relations experts, and employees as possible.

To get a sense of where companies are currently standing on issues, see our 2019 year-end roundup blog. And then read this Bulletin of Atomic Scientists article by my UCS colleagues Kathy Mulvey and Peter Frumhoff and Myles Allen of the University of Oxford on what shareholders need to demand from fossil fuel companies going forward. So what’s important in 2020?

Low-carbon research and development vs. upkeep and exploration

The (minuscule) amount that fossil fuel companies have spent on low-carbon research and development, including carbon capture and storage (CCS), biofuels, and investment incubators, is not even a drop in the bucket compared to how much they spend on supporting their current business model, best represented by company capital expenditures (CapEx). CapEx covers all the funds used by a company to acquire, upgrade, and maintain physical oil and gas assets and undertake new oil and gas projects or exploration – to simplify, all the money they spend on producing and preparing to produce more fossil fuels.

In the last few years, investors and think tanks have begun to see this ratio as a signifier of how seriously a company is addressing climate change and the transition to a low-carbon economy. In its 2019 BP-supported shareholder proposal, the shareholder group Climate Action 100+ demanded an explanation of how all new CapEx spending will be consistent with the Paris Agreement’s global temperature goal. The International Energy Agency (IEA) recently declared that the total investment by oil and gas companies in renewable energy, biofuels, and CCS, together, has been less than 1% of total CapEx. This pretty much sums up this issue.

Next time you see an oil company ad saying they’re “part of the solution” maybe just share this image back. 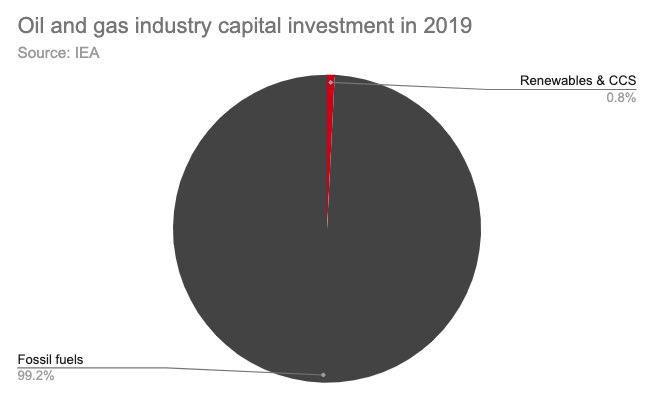 601 people are talking about this

Most of the oil and gas majors have been listed as defendants in over a dozen lawsuits brought by cities, counties, and states against fossil fuel companies, seeking damages for the costs these government entities will pay to cope with the climate impacts, such as sea level rise and heat stress. Given the size, scope, and press attention of these lawsuits, you’d think companies would acknowledge them in their SEC disclosures as a potential shareholder risk. But in reality, only Shell and ConocoPhillips have been reliable in disclosing their role as defendants. After failing to mention the lawsuits in its 2018 SEC documents, Chevron made a hard left turn and discussed them three times in its 2019 filing.  With the number of lawsuits growing, BP and ExxonMobil should follow suit and disclose the lawsuits as well.

Last year the administration started the rollback of Obama-era regulations on methane emissions. As discussed in our blogs, we thought this was a terrible plan. Surprisingly, so did a number of the major oil and gas companies. The industry was actually split on the issue, with the American Petroleum Institute (API), the powerful oil and gas trade association, eventually coming out strongly in favor of the rollback. In 2020, it will be important for companies to reiterate their clear opposition to the rollback and to lay out their own ambitions for voluntarily reducing methane emissions. Given the policy position dispute with API, it will also be important for companies that oppose the rollback to publicly break with API on this issue.

It is! Check back in throughout the next few months to get our take on all these reports and any changes in company positions. In May we’ll be heading to the company annual meetings to demand climate action directly from the company and reporting back on our experiences. At that point, all this reading will be over and someone will have to dig me out of this paper pile.