We Need the Clean Air Act, Now More Than Ever

As the United States observes Air Quality Awareness Week, a new report commissioned by NRDC highlights the landmark achievements of the Clean Air Act to protect our health. Since its near-unanimous passage by Congress 50 years ago, this law has delivered on its intent to reduce air pollution, improve health, and extend the lifespan for people all around the country. The new report finds that pollution reductions due to Clean Air Act programs will prevent up to 370,000 premature deaths in 2020, growing to up to 457,000 avoided premature deaths by 2030. But our continued enjoyment of those air quality and health benefits, estimated to outweigh costs by a factor of more than 30, is now in peril due to the Trump administration’s aggressive assault on the scientific underpinnings of this law.

The science is clear: clean air saves lives. It also contributes to economic prosperity, by reducing healthcare costs and boosting worker productivity. The deadliest form of air pollution, called fine particulate matter or soot, is especially harmful because these microscopic particles can penetrate deep into our lungs and enter the bloodstream. From there, they can damage key organ systems in our bodies: fine particles contribute to disease in our hearts, lungs, brains, and kidneys— and that’s just a partial list. We’re learning more about the links between short- and long-term exposure to polluted air and health problems, even at levels well below current Clean Air Act limits.

A new study attributes about 107,000 premature deaths per year to fossil fuel–driven air pollution. It’s clear we need to strengthen public health protections like the Clean Air Act and the Clean Power Plan—not tear them down. Take action today: https://on.nrdc.org/2N5eqfy 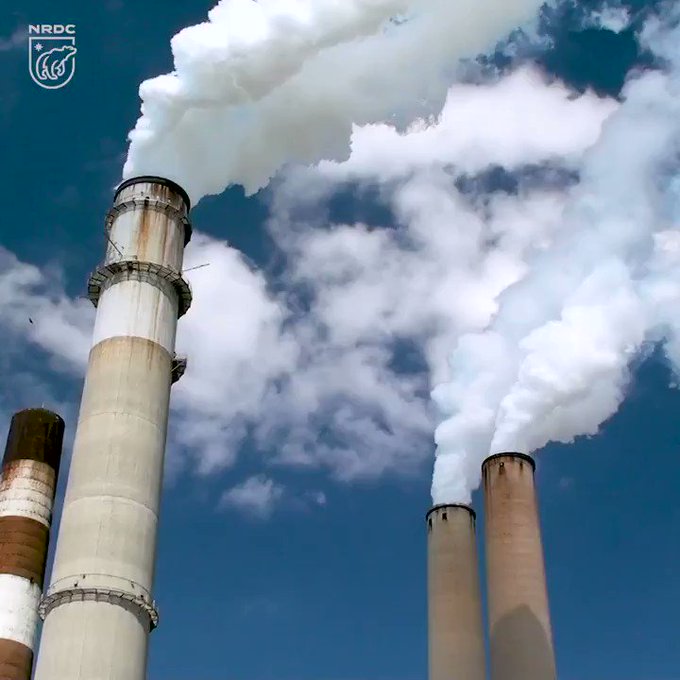 60 people are talking about this

But even with the mountains of evidence demonstrating these serious health dangers and the monumental costs of air pollution-related diseases on healthcare spending, our country’s continued progress in delivering cleaner air for all is far from a foregone conclusion.

Clean Air Is Not A Given

Despite President Trump’s claim that the U.S. has the “cleanest air” in the world, the alarming truth is that many people in this country are still breathing in unhealthy levels of air pollution, day after day. The U.S. Environmental Protection Agency (EPA) estimates that huge swaths of our population live, work, and play in “non-attainment” areas, where pollution levels exceed Clean Air Act limits set to protect our health. For example, the EPA estimates that more than 20 million people reside in counties with annual fine particles pollution levels above the legal limit; that number balloons to 122 million people for ground-level ozone air pollution, also known as smog.

As worrying as those numbers are, things seem to be getting even worse. Air pollution levels around the country have risen under the Trump administration for a number of reasons, including reduced vigilance and enforcement against polluters at the EPA; deadly smoke generated by unprecedented, climate change-fueled wildfires in the western United States; and summertime extreme heat episodes that continue to break records and trigger air pollution spikes.

@EPAAWheeler repeats one of his favorite, oft-repeated falsehoods, that “all six criteria air pollutants have decreased” under Trump, e.g., smog, soot.

Rather than take stronger steps to limit air pollution and fight the climate crisis, the Trump administration is waging an all-out assault on the Clean Air Act. Over the past five weeks alone, the EPA proposed rules that would enable more deadly air pollution from cars and coal-fired power plants, and it declined to set a stronger fine particle air pollution limit despite an assessment from its own scientists that such a move could help to prevent more than 12,500 premature deaths each year.

But the Trump administration has not stopped there: it is now seeking to censor scientific research, ignore key public health studies, and undermine the cost-benefit math that underlies the federal government’s decades-long approach to pollution control. The Trump administration denies the established science of climate change, and resists actions to reduce our dependence on fossil fuels, even though such moves would substantially reduce air pollution and improve health in the near term and help us to avoid billions of dollars in climate damages to lives, infrastructure, and property for years to come.

On April 16, 2020, for 1st time in @EPA history, the Trump administration & @EPAAWheeler declared it is not “appropriate” or “necessary” to regulate neurotoxins, lead & mercury, cancer-causing pollution, & dozens of other toxic air pollutants from a large industrial polluter. https://twitter.com/EPA/status/1253000152006131719 …

Since the first #EarthDay, EPA has regulated lead out of paint, air, & gasoline. It started fuel-economy testing (and then caught those cheating on them), phased out ozone-depleting aerosols, & removed cancer-causing pesticides from the marketplace. More: https://www.epa.gov/newsreleases/earth-day-turns-50-0 …

The Trump administration’s outrageous pro-polluter agenda is now under renewed scrutiny because the coronavirus pandemic disproportionately harms the most vulnerable amongst us. A preliminary study from Harvard researchers, still undergoing peer-review, has identified significantly higher COVID-19 death rates in U.S. counties with even slightly elevated levels of soot air pollution. Their findings build on evidencelinking long-term air pollution exposure to deadly acute respiratory distress syndrome in older Americans. In another preliminary study out of Europe, researchers have detected RNA from this new coronavirus on air pollution particles.

These emerging lines of evidence are troubling given the known population health risks posed by air pollution, and the fact that the World Health Organization estimates that about 90 percent of the global population breathes unhealthy air. But that striking statistic obscures the inequitable distribution of air pollution around the world, with countries like India struggling with chronically high pollution burdens.

In the United States, disparities in air pollution exposures burden low-income communities and communities of color, driving major health disparities. A new analysisfrom NRDC scientists highlights the fact that millions of people live in U.S. counties with both high concentrations of polluting facilities and high death rates from COVID-19.

Instead of stepping up to protect public health during this historic crisis, political leaders at the EPA have given polluters a free pass to suspend pollution monitoring and reporting. The Trump administration’s assault on our nation’s clean air protections is unconscionable, especially now.

While early data suggested that COVID-19 related deaths were most strongly associated with advanced age and underlying health conditions like diabetes, obesity, cardiovascular diseases, and lung-re…

29 people are talking about this

Ensuring Clean Air For All

With millions of Americans still exposed to unsafe levels of air pollution, it’s well past time for the EPA to prioritize people over polluters. As this new report shows, the Clean Air Act has propelled tremendous progress in improving air quality and public health, but there is still important work left to do. Each of us must demand that the EPA obey the law and enact equitable, commonsense protections from air pollution that will allow us to breathe easier, address the climate crisis, and save money in the process.