Wrecking the BLM From Within

William Perry Pendley, the self-proclaimed “Sagebrush Rebel” from Wyoming who’s shaking up the Bureau of Land Management, may be headed for reappointment without any public scrutiny.

The dustup over Pendley began in July, 2019, when he became acting head of the bureau–which oversees drilling, ranching and recreation on 245 million acres of public lands, primarily in the West—and it hasn’t cleared since. A dozen Democratic senators and 91 conservation, hunting, public interest and wildlife groups have called for his ouster, citing his decades-long campaign as a property-rights lawyer to dismantle federal control of the public lands he now oversees as a BLM chief.

The Old West firebrand also has an inflammatory streak. He has slurred climate-change believers as “kooks” and sympathized with Cliven Bundy, the Nevada rancher who was part of an armed standoff with federal agents after he refused to pay the bureau’s grazing fees.

“As someone who has spent his career advocating for the widespread sale of public lands, Mr. Pendley is the last person who should be running the BLM,” Democratic Senator Michael Bennet of Colorado said. “Coloradans place enormous value on our public lands – not just from a conservation perspective, but because they serve as the backbone of our economy.”

Pendley has fired back at his accusers, saying they have mischaracterized his record and that he opposes the wholesale transfer of public lands. But since Pendley wasn’t formally nominated by the White House, he–like many other officials in the Trump administration—has sidestepped a grilling about his past at a Senate confirmation hearing.

The question now is whether Interior Secretary David Bernhardt will extend Pendley’s acting position, which expires on April 3, for a third time. His reappointment is likely, say Pendley watchers, because of his prominent role in one of the biggest changes in the bureau’s history–the relocation of its headquarters from Washington, D.C., to Grand Junction, Colorado. The move, which is spurring an exodus of professional staffers, is widely seen as taking the bureau out of the national conversation over the use of public lands and diminishing it to a western agency with western concerns. That the BLM will now share a building in western Colorado with Chevon adds to the bad optics.

“There’s not much chance of a nomination,” said John Freemuth, a professor of public land policy at Boise State University who served as chair of the BLM science advisory board during the Obama administration. “I think they will reappoint him since he has been given the public-facing lead on implementing this reorganization.” 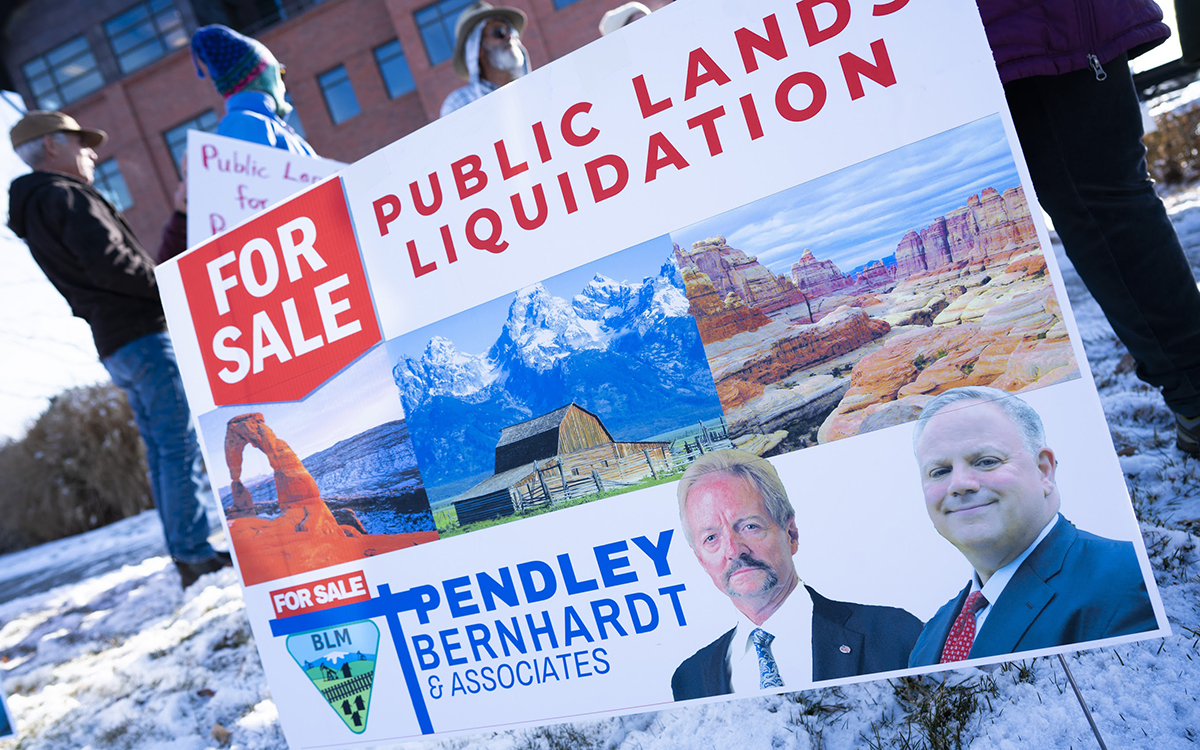 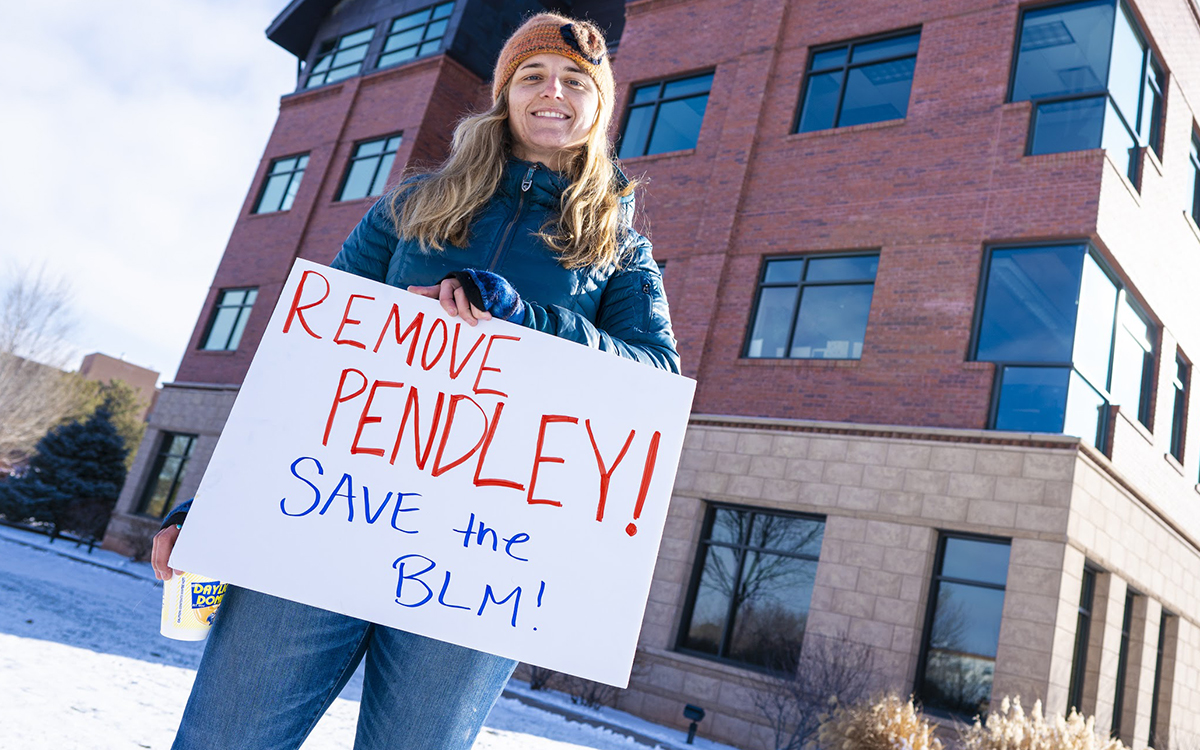 Even before Pendley arrived, the BLM was shifting away from a focus on wildlands preservation. Bernhardt, a former oil and gas industry lobbyist, has pushed for more drilling. Oil production and energy revenues from public lands hit records in fiscal 2018, helped by streamlined permitting timelines. New rules on cattle grazing, another flashpoint issue in the West, are on the way.

A spokeswoman for the interior department didn’t respond to a request for comment. BLM has said the relocation puts staffers closer to the lands they manage while cutting costs.

Pendley likes to evoke the Sagebrush Rebellion of the 1970s as a pivotal moment in US history. In 2016, he wrote in the National Review that environmentalists in the Carter administration provoked the revolt by ranchers, drillers, and loggers against federal authority by intervening in land-use decisions. Calling Obama worse than Carter, he wrote a line that has come back to haunt him. “This time westerners know that only getting title to much of the land in the West will bring real change.”

As head of BLM, Pendley has softened his tone. He says he was expressing the views of many westerners in the commentary, but not his own.

After working in the Reagan administration, beginning in the late 1980s Pendley spent three decades at the Mountain States Legal Foundation. The Colorado foundation was led in its early days by James Watt, the anti-environmental crusader who became Reagan’s interior secretary. As the foundation president, Pendley represented ranchers, miners, loggers, and drillers, sometimes suing the BLM and other federal agencies on their behalf.

As a result, upon becoming BLM chief Pendly had to recuse himself in matters involving more than 50 individuals and groups to avoid conflicts of interest. Among those on the recusal list was an energy company aiming to drill near Glacier National Park and two counties in Utah that backed the Trump administration’s move to reduce the size of the Grand Staircase-Escalante National Monument.

Today’s energy boom on BLM lands, fueled by a surge in the number of acres leased to drillers, poses threats to priority areas for wildlife in several states, such as migration corridors and wintering grounds for animals like elk and mule deer. BLM had offered gas and oil leases for sale in priority areas prior to the order and continued to do so afterwards, according to a study by the Center for American Progress. From January 2017 to April 2019, 82 percent of the offers in New Mexico were in the state’s critical wildlife habitat; for Colorado, the number was 40 percent, and 39 percent in Nevada.

“Our members are hunters, anglers, hikers, and bird watchers and they are outraged at this,” said Mary Jo Brooks, communications manager for public lands at the National Wildlife Federation. “The Trump administration had said it wanted to protect these areas.”

BLM has been forced to retreat as its leasing encroached in particularly sensitive areas. Last year, facing opposition from tribal groups, BLM reversed its plans to offer leases within 10 miles of Chaco Culture National Historic Park. In Idaho and other western states, BLM had planned to reduce protections for sage-grouse, whose numbers have been dwindling, to allow for leasing. But last year a court blocked the move, calling it contrary to the best science.

Pendley opened the new BLM headquarters in Grand Junction in early January. But it’s unclear how many of the 150-some staffers who received relocation assignments will make the move, either to the new headquarters or to offices in other western states. Pendley indicated that nearly two-thirds of the employees would relocate, but the real figure may be smaller. The majority of staffers may either look for another job or retire, Greenwire reported in December. In late January, Pendley warned staffers that those who don’t accept relocation faced firing.

The shift West, while putting professional staffers closer to public lands, may make it harder for them to do their jobs. They will be spread out among many western cities, making the cross-disciplinary collaboration which has been essential to the BLM’s work more difficult, says Ed Shepard, who started as a soil scientist at the bureau before retiring as a state director after 38 years.

“The disciplines—hydrologists, petroleum engineers, foresters—they all need to work together,’’ said Shepard, now president of the Public Lands Foundation. “Most of the people don’t see this as a good idea. It’s going to make the bureau on a national policy scale more irrelevant.’’